HouseCentipede.Info takes a casual look at the intimidating, yet utterly useful, House Centipede insect of North America. As their name suggests, these insects are common to the inside of dwellings typically occupied by humans and are consistently found in damp dark places such as crawlspaces and in sinks, bath tubs, and other basins related to water. Despite its appearance, the House Centipede - also referred to in some circles as the 'Spider Limousine' - is a ferocious predator of other house pests, making them ideal 'protectors' throughout the home.
[ Tap Anywhere to Close ]

Getting to know the common North American House Centipede.

House Centipedes belong to the class Chilopoda representing over 3,100 known species worldwide. North American species include Scutigeromorpha, Scolopendromorpha, Lithobiomorpha, and Geophilomorpha of which the House Centipede is part of the Scutigera coleoptrata family. The name 'Centipede' is derived from the Latin meaning '100 Foot' but the name can be misleading as segments and pairs of legs vary between centipede types.

House Centipedes can measure up to 1 3/8 inches long and are typically found in bathtubs, sinks, in crawl spaces, and along walls in the night time hours. They traverse drain pipes with ease which is why they can be found in these places of the house. They typically feed on household insects including pests like the dreaded cockroach - as such their benefit is often overlooked by homeowners. The creatures can also be found outdoors in the night time hours during the summer months, feeding on insects such as moths.

Because of the general arrangement of their legs, House Centipedes appear intimidating and, when on the move, they elevate their bodies off the surface of the floor - giving them an even more surreal look. When at rest, the body is set on the ground or wall. Their multi-legged design also gives them enhanced agility and speed - both to strike at unsuspecting prey or to evade danger. House Centipedes will typically run once discovered by humans though they can inflict a bite if pressed so caution should be taken.

The general territorial reach of the common House Centipede.


The territorial reach of the common House Centipede is essentially the entirety of the United States, from Maine to California and Washington (state) to Florida, and throughout Canada making it a common site regardless of time zone. 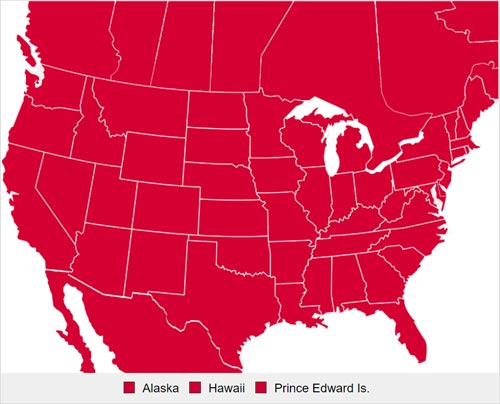 Photos and images of the common House Centipede.

Hard to photograph (when alive and moving), the following images were made available through various photographers from our sister site www.InsectIdentification.org.

Other species similar to the House Centipede.

There are a handful of centipede and centipede-like insects to become familiar with so as to avoid confusion when identifying species. These are showcased below.